You are here: Home / Archives for Time Machine 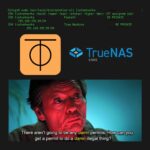 ZeroTier is an incredibly useful tool to enable true access from anywhere to any networked resource. I've been using it for a few months to access my Home Assistant instances, VNC to my home Mac, and log in to my servers even as I'm traveling and using odd networks like airplane and hotel Wi-Fi and LTE on my iPhone. Although TrueNAS has removed ZeroTier support, the FreeBSD … END_OF_DOCUMENT_TOKEN_TO_BE_REPLACED

I've had terrible issues with Mac OS X never completing Spotlight indexing and Time Machine backups. I was pulling out my hair until I decided to check the console log. That's when I saw this: Thousands of mdworker errors, with a dozen appearing every second. What could it mean? There was no more information in the console or inspector. I immediately turned to the Google … END_OF_DOCUMENT_TOKEN_TO_BE_REPLACED

Apple's not an enterprise company or a storage company. In fact, they're rapidly jettisoning both - consider the sad fate of the Xserve RAID. But Apple does have enterprise features and storage features in their operating systems. And Mac OS X 10.7 "Lion" is a great case in point. From Versions to Time Machine Local Snapshots to AirDrop, Lion brings some storage love, and … END_OF_DOCUMENT_TOKEN_TO_BE_REPLACED

Apple is readying the next major release of their Mac OS X operating system. Dubbed "Lion", Mac OS X 10.7 is widely expected to hit Apple stores in the Summer of 2011, and brings many exciting new features along for the ride. This series of articles introduces the storage and data protection features of Lion as they are revealed. Many operating systems include a backup … END_OF_DOCUMENT_TOKEN_TO_BE_REPLACED

Time Machine is one of my favorite Mac OS X features. Sure, it's not loaded with features and customizability, but it works for the most part. Plus, it's so easy to set up that it encourages the average computer user to actually have a backup. Anything that encourages backups is great news in my book! But Apple recently rolled out a "Time Capsule Backup Update", and … END_OF_DOCUMENT_TOKEN_TO_BE_REPLACED