You are here: Home / Archives for Raspberry Pi

If you're like me, you have a lot of different systems running in different places: at work, at home, in the lab, and in the cloud. And if you're like me you've often struggled to connect and access these machines, especially when you're on the road. At long last, I have a fully functional solution that lets me access everything from everywhere, securely and efficiently, … END_OF_DOCUMENT_TOKEN_TO_BE_REPLACED 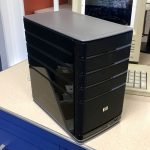 I was recently given an old HP MediaSmart EX470 server along with some other junk hardware. Although it has no graphics, a slow single-core AMD Sempron CPU, and just 512 MB of RAM, I was able to revive it quite satisfactorily. Here's how I upgraded the hardware and software. Remembering the MediaSmart HP released the first MediaSmart server in 2008, and there was much … END_OF_DOCUMENT_TOKEN_TO_BE_REPLACED

I've really enjoyed experimenting with the Raspberry Pi, and have even deployed a few as UNIX servers in my home and office network. The quad-core performance of the latest Pi models is awesome, but serious I/O limitations remain. With just one USB 2.0 interface shared for all network and storage operations, you aren't going to be able to do much with the Pi. That's why I was … END_OF_DOCUMENT_TOKEN_TO_BE_REPLACED 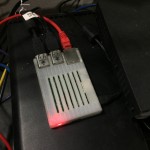 As many folks following me on Twitter have noted, I've been building quite a nice vSphere "datacenter" lately. Part of this build was integrating UPS monitoring and automatic shutdown, and I'm pleased with the result. I'm using a Raspberry Pi connected to two UPSes via USB as a NUT server and have installed a native ESX version of upsmon to monitor and react as UPS events … END_OF_DOCUMENT_TOKEN_TO_BE_REPLACED

I had a little bit of a learning experience this week regarding NFS exports and Mac OS X that I thought would be interesting to share with my readers. It's part "simple tip" and part "facepalm." Read on! TL;DR: NFS works (insecurely) if you use all_squash and set anonuid and anongid to match your UNIX user ID The Setup: What I Wanted to Do I have an old Iomega ix4-200d … END_OF_DOCUMENT_TOKEN_TO_BE_REPLACED