You are here: Home / Archives for hybrid hard disk drive

Ask a Pack Rat A timely question from a comment on my cheap Momentus XT post and continued in my inbox: How well does [the Momentus XT] perform in a Mac laptop? What I've noticed is substantial slow-down on my older MB Pro when there's a lot of virtual memory usage (e.g. when running several apps plus Parallels.) For my next MBP (hopefully in the next 2-3 months), I'm … END_OF_DOCUMENT_TOKEN_TO_BE_REPLACED 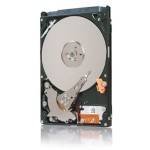 Seagate has definitely gotten the attention of road warriors and storage nerds with their Momentus XT hybrid hard disk drive. Many agree with Brent Ozar, who called for it to be a standard component of every laptop. Even I was impressed! But the Momentus XT hasn't seen much (any?) uptake by OEMs. Perhaps customers weren't ready to pay a little extra for a lot more … END_OF_DOCUMENT_TOKEN_TO_BE_REPLACED

There has been much speculation that a new generation of hybrid flash/hard disk drives was right around the corner, and Provantage confirmed it today: The reseller posted a family of "Momentus XT" 2.5" laptop drives for sale on their web site, shipping in 3-4 weeks. Many other sites began listing the drives as well, and The Register got the scoop, benchmarks, and official … END_OF_DOCUMENT_TOKEN_TO_BE_REPLACED

Hard disk drive makers are adding flash storage to their conventional spinning-platter drives to improve performance and are targeting the performance PC market. Wait a second, haven't we seen this before? As Rocky eventually said to Bullwinkle, "but that trick never works!" Flash as a Cache Using flash memory as a disk cache is a pretty good idea. Flash has awesome random … END_OF_DOCUMENT_TOKEN_TO_BE_REPLACED