You are here: Home / Archives for hard disk drive 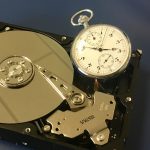 Hard disk drives encounter errors from time to time, so it's a good thing that most have the ability to recover data anyway. But RAID systems usually have their own error recovery capabilities and can be thrown off when a hard disk pauses I/O. So it's a good idea to use hard disk drives that allow you to disable or limit error recovery in RAID systems. Error Recovery … END_OF_DOCUMENT_TOKEN_TO_BE_REPLACED

Have you ever wondered if mounting a hard disk drive on its side or even upside-down affects its lifespan or reliability? According to every drive manufacturer, it's perfectly acceptable to mount a hard disk drive in any orientation as long as it's not tilted and has sufficient cooling. File this under "now you know"... My new server case, the NZXT H440, has five drive … END_OF_DOCUMENT_TOKEN_TO_BE_REPLACED

I've written a few times about my quest to build the ultimate home storage/server rig. But one issue was surprisingly vexing: What kind of case has room for a dozen or more hard disk drives? In this update, I'll talk about the various options as well as the one I ultimately picked: The NZXT H440 (and a Corsair power supply). 2017 Update: After owning and using this case … END_OF_DOCUMENT_TOKEN_TO_BE_REPLACED

Seagate and Western Digital appear to have locked up the majority of the hard disk drive (HDD) market with their respective acquisitions of Samsung and Hitachi's business. Leaving Toshiba with just a sliver, the American companies will soon become giants, each with more than 40% of the total HDD share and a full line of products. Despite the noise made by solid-state disk (SSD) … END_OF_DOCUMENT_TOKEN_TO_BE_REPLACED

Seagate is one of the world's most-successful hard disk drive companies, consistently ranked first in overall sales for a decade. The company is respected for their high-end products, but is aggressively moving into the world of smaller hard disks for laptops and portable storage as well. The company's mainstream "Momentus" portable hard disk family has kept pace with the … END_OF_DOCUMENT_TOKEN_TO_BE_REPLACED

If you can keep your head when all about you are losing theirs…
If you can wait and not be tired by waiting…
If you can think – and not make thoughts your aim…
If you can trust yourself when all men doubt you…
Yours is the Earth and everything that’s in it.