Somewhat disappointed in the Clear PXU1900, I decided to try another 4G mobile broadband solution. Verizon began their LTE buildout after Clearwire’s WiMAX was already widely deployed, but they have moved aggressively to catch up. And Verizon has the benefit of better if less-plentiful spectrum for their network. My experience with Verizon’s 4G LTE service, and their Novatel MiFi 4510l modem, has been quite positive so far.

Verizon LTE: State Of The Art

A few years, back, it looked like WiMAX was the wave of the future for mobile network access. With an all-IP platform and the support of computer giants like Intel, how could it fail? But everything has been derailed since then, and LTE has emerged as the likely 4G champ worldwide.

It is extremely odd that Verizon chose LTE for their 4G network. After all, they are the largest non-GSM mobile provider, having followed the path to IS-95 and EV-DO while arch-rival AT&T (and most of the rest of the world’s mobile operators) focused on GSM and HSPA. Although LTE is quite different from earlier GSM-based technologies, it shares some common supporting elements, including SIM cards and other access-control technology.

But Verizon has firmly and completely committed to LTE even as Clearwire and Sprint waver on WiMAX. In just over one year, Verizon has lit up their 4G data network to cover more than half the population of the USA, and they announce even more availability on a regular basis.

Verizon really has another ace in the hole when it comes to 4G. Clearwire’s 2.5/2.6 GHz WiMAX network suffers from interference from 2.4 GHz devices (Wi-Fi, Bluetooth, cordless phones, microwave ovens, security cameras, and all sorts of other wireless junk) and is extremely sensitive to walls, hills, and antenna orientation. In contrast, Verizon’s 700 MHz “Upper SMB block C” spectrum licenses are much cleaner and penetrate buildings far better. Even other LTE buildouts (from Lightsquared, AT&T, and Clearwire) will not be as solid in the USA as Verizon’s since they will use that troubled 2.5/2.6 GHz spectrum as well.

Verizon’s 4G offerings are fairly pedestrian and somewhat expensive. $50 buys you 5 GB of monthly data on the 3G or 4G network, and $80 doubles that data allowance. A 2-year contract gets a generous equipment discount, as is typical in the industry.

I searched eBay for an inexpensive Verizon modem to purchase, since I dislike contracts, but came away disappointed. Verizon 4G devices sell for $150 or more, even as Clear 4G modems can be found under $50. I decided to settle for a contract, assuming the money I save now can be applied to the early termination fee if I decide to drop service.

On the device front, all of Verizon’s offerings support both 3G (EVDO) and 4G (LTE) data, which is great since I don’t live in a 4G area but often travel. I considered a USB modem for use with my Cradlepoint router, but my old PHS300 doesn’t support them. Even though I also have a brand-new CBR400, it’s not battery powered and my MBR1200 isn’t exactly portable!

I had a positive (if not always excellent) experience with my 3G Virgin Mobile MiFi 2200 as well as a Huawei E585 I purchased for use in Europe, so I decided on a “portable hotspot” device from Verizon. They currently offer the Samsung SCH-LC11 and Novatel MiFi 4510l, but reviewers have not shown much preference for one over the other, and both are nearly identical hardware-wise.

I chose to stick with Novatel, based mainly on two minor advantages: Reviews suggest that the Samsung has trouble charging while powered on, making it less suitable for long-term fixed use. Also, although no 4G hotspot from any provider currently supports USB tethering, a throwaway mention in an AnandTech review suggested that this was indeed possible. I hoped that USB tethering, unsupported or not, might be possible in areas thick with Wi-Fi.

I purchased my Novatel MiFi 4510l from Wal Mart’s online mobile phone arm, Letstalk. They offered the device free with a 2-year contract, and threw in free overnight shipping to boot. After a little hassle with email and a phone call, I was able to get the device ordered and it arrived just under 48 hours after I clicked “buy”.

The MiFi 4510l is much improved over my old Novatel 2200. The old device has an impossibly-finicky power button, sometimes leaving the device on even when the lights were off. In contrast, the 4510l is easy to operate and reliably powers down. The new device also includes an integrated e-paper display which clearly shows signal strength and battery status.

But Novatel’s engineering still leaves much to be desired. Both MiFis share the same insanely-incompatible power cord (though the new one will at least charge when powered off) but use different batteries. The 4510l “forgets” its internal bandwidth usage counter every time it is restarted, a criminal omission on a device fast enough to deplete your data allowance in just a few hours! And the software interface is even less detailed and informative than before. Plus, Novatel insists on printing the default password on an external sticker!

The 4510l is about as thick as two 2200s, but still small enough to slip into even a small pocket. It lasts hours on a charge and, when plugged in, can indeed fill the battery and function simultaneously. Unlike the Clear modem, the (single) external antenna port is covered by a rubber plug. The e-paper display is reasonably informative, and the three-color LED joins in, showing 2G/3G (purple), 4G (green), and power-off (yellow).

Out and About With Verizon LTE

I’ve been really impressed by Verizon’s LTE coverage, especially indoors. Although only the airport had service in Austin, I’ve gotten LTE signals far outside Cleveland and Denver. And unlike Clear’s WiMAX, which slowed to a crawl just a few feet indoors, the Verizon LTE network hummed along over 5 Mbps deep inside hotel and office buildings.

Verizon’s LTE network speed is impressive compared to 3G, especially when it comes to uploads. Clear obviously throttles upload speeds in some cities, with 300 Kbps a universal maximum regardless of download throughput. But Verizon’s LTE network was nearly symmetrical in my tests, ranging from about 5 Mbps in Denver and Las Vegas to over 10 Mbps in Cleveland.

3G (and even 2G) data support was gratifying as well. In completely unscientific head-to-head testing, the Verizon Mifi consistently outperformed my Virgin Mobile (Sprint network) MiFi in the wilds of Northeast Ohio. My AT&T iPhone 4 was faster than the Verizon 3G network in some areas, but almost uselessly-slow in others. In all tests, the Verizon chugged along, providing predictable and acceptable 3G performance.

In terms of network performance, I really have only one gripe with the Verizon MiFi 4510l: It has trouble in areas of faint LTE coverage. I have encountered a few instances where it tried to connect to LTE, then failed and claimed to connect to EVDO but no data was going through. Others have reported the same issue, suggesting the tedious “fix” of forcing it to 3G or 4G when in these locations.

Hopefully future firmware will address the network failover issues. It would be nice if Verizon also added a usage counter than survived reboots, though simply querying Verizon’s online account information and integrating it into the web interface would be a fine alternative. Hardware-wise, it would be great if some MiFi added 5 GHz Wireless-N support to clear up the 2.4 GHz band!

I would not hesitate to recommend Verizon’s 4G LTE network. It’s head-and-shoulders above Clear/Sprint WiMAX and will likely stay that way for a while thanks to their use of the 700MHz band. Verizon’s rapid network expansion and broad 3G network are reassuring enough to entice me into a 2-year contract. And the Novatel MiFi 4510l is a fairly solid device, though not perfect.

One more thing: I am very close to tethering the 4510l to the Cradlepoint over USB. It appears to be very possible, given the correct setup. Watch this space for news!

Readers of my blog know that I love computer history. Therefore, I decided to focus my entry in Juniper Networks’ “Build the Best (Lego) Data Center” contest on the history of computing. Specifically, I would re-create key historic machines to contrast them with a modern view. 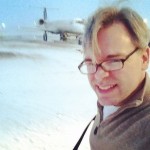 “Credit of debit?”ï»¿ It’s all very confusing for American shoppers. But the news about a massive point-of-sale data theft at Target makes one thing very, very clear: Always choose “credit” when the cashier asks!