You are here: Home / Archives for hardware hacking 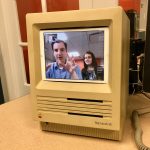 What happens when you mix two old, broken things together? In the case of my Mac SE and iPad mini, the result was pretty cool! Meet my desktop videoconferencing system! I spend a lot of time on conference calls, often using one of the too-plentiful slide and video sharing applications. I've found that the iPad version of these apps is typically more stable, quicker to … END_OF_DOCUMENT_TOKEN_TO_BE_REPLACED

My late-2009 27" Intel iMac now has an eSATA port. I'm documenting how I did it here mainly for posterity. Although it works fine, I cannot recommend that others attempt to perform the same surgery on their own crazy-expensive Apple computers. eSATA mods like this won't be satisfying to most users, and the operation is risky and destructive enough that non-crazy people … END_OF_DOCUMENT_TOKEN_TO_BE_REPLACED